Best and Worst Driving Habits – Something for Everyone!

Americans love their cars, and finding joy in driving seems to be a truly American trait. In most areas in Texas, a personal car is still the easiest way to get around. If you’re one of the millions that drive daily, you’ve probably picked up some habits, good and bad, while behind the wheel. Here are some of the best habits we could all aim for more often, and the worst ones that most of us have been guilty of at one time or another.

When possible, limit distractions such as phones, foods and too many people. If you’re traveling with pets, make sure that they are secured both for their safety and to avoid them from distracting you. Try to map out your route before ever turning your car on so that you won’t need to look at your phone or GPS for directions.  If you are in an unfamiliar car, take a few moments to learn where the controls are before you actually hit the road. A few minutes of preparation could spare you from a serious accident.  There are apps that help to avoid with distracted driving in the app stores that help you avoid getting distracted by your phone while driving.

Obeying the speed limit seems like a no-brainer that is a given for safe driving, but sometimes it’s easier said than done. The flow of traffic on highways is often higher than the posted speed, but zooming in and out of traffic can lead to very dangerous driving conditions.

Allowing for safe following distance is an important habit it be mindful of while driving. Construction, weather and traffic congestion can make our response times slower, so maintaining a longer following distance can help avoid rear ending others. Experts suggest maintaining a 3 second gap between you and the object in front of you. Remember, some vehicles such as semis or RVs may need longer to stop than others.

Even with advanced technology allowing for hands-free cellphone use, distracted driving still contributes to nearly 3,500 deaths each year.  Many states, including Texas, have banned hand-held cellphone use while driving.  Even glancing at your phone to read a text can take your eyes off the road for about 5 seconds.  A lot can happen in that time, so it’s best to avoid looking at your phone at all.  Lots of other things we do like eating, interacting with passengers or even being sleepy can also be dangerous while you are behind the wheel.

Failure to merge properly is one of the leading causes of accidents on the roadways. Reading and obeying road signage is the easiest way to avoid accidents such as side swipes. For lane closures, experts recommend zipper merging, or using both lanes of traffic until one ends, but many drivers see the last minute changing of lanes as rude. No matter when you merge, it’s important to make sure you are aware of what is ahead of your car, what is behind and to check blind spots before moving.

It’s likely that you’ve experienced road rage at some point in your driving career, especially if you drive in congested areas regularly. Becoming angry at other drivers is normal, but becoming aggressive can lead to dangerous situations. Try to remember that most of us have made mistakes while driving and usually it is done without malicious intent. This is one place where it’s probably best to take the high road and let the other driver move on.

We hope these tips are helpful. Just remember, keeping your cool and taking the high road is always a better choice for both you and your car. 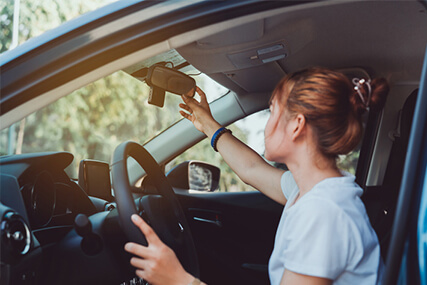